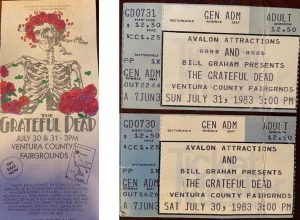 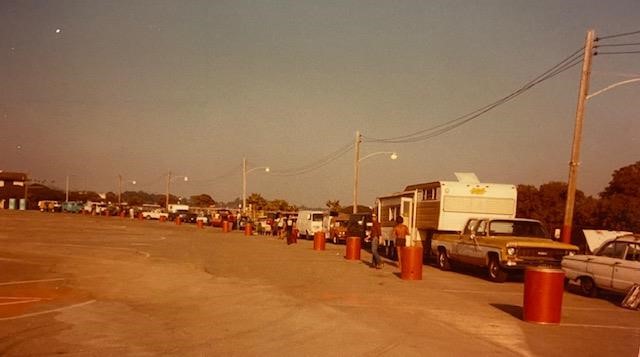 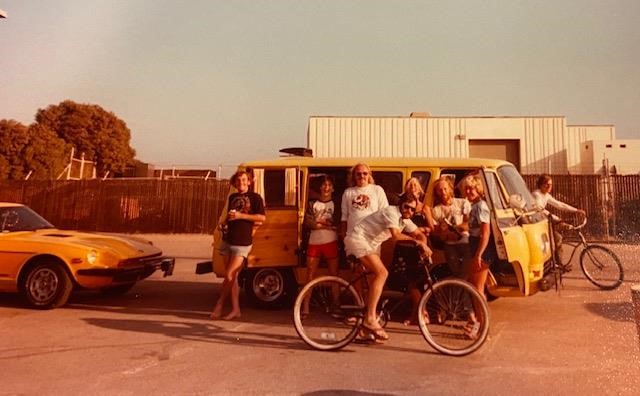 Having to wait 378 days to be back at the Ventura County Fairgrounds parking lot was grueling. As we arrived by the afternoon, we were surprised to see a few more new faces and vehicles that caught onto early arrival shuffle. At first we gathered in the open lot adjacent to the fairgrounds, just like year one, but as more vans and RV’s arrived, we decided to get the line established in the main lot. A few BGP security boys were already on hand and remembered us from 1982. Of course, I was elected to approach them with the idea of moving the line onto the grounds knowing the current lot was quickly filling up. We did not want to have issues the next day with people showing up, pulling in front of us and then having bad juju take over. The security detail agreed to let us move our pre-established line into place and even offered to help place trashcans to guide any new arrivals that were sure to come throughout the night. It felt as though we were a team, in a way, with BGP and us eager Dead Heads. 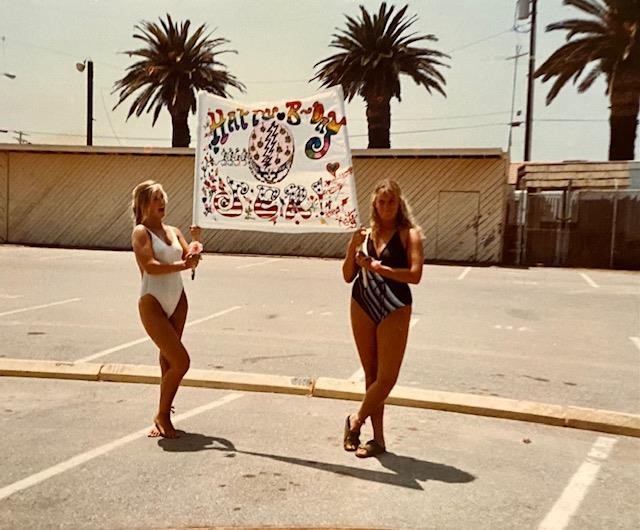 During the day and a half of pre-festival parking lot antics most Dead Heads just hung out, rode bikes, and got to know each other well. I, myself, had to have some sort of creative outlet to keep my mind busy. Knowing Jerry’s 41st birthday was the day after the weekend ended my friend, Kristy and I made a beautiful Bday banner to present to him on Sunday. 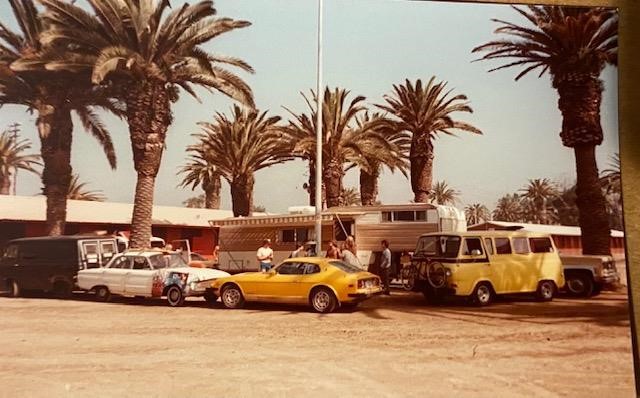 Change happens all the time when it comes to producing music festivals. The difference for us early attendees was welcomed with parking choices. This year we scoped out an area behind the far back horse barns and under giant palm trees. The big surprise here was finding electrical outlets and water spickets. Now we could provide live music that was plugged in. The first live “electric” band on the lot was named Slipknot.

The campground rocked before and after the main event. Our camp became known as 911 Beryl Street because half of Slipknot, and Mr. Buck, all presided at the address way back when.  We were so set up with more than we ever dreamed of that we also began to make burritos to hand out to hungry souls. These burritos became known as Buck’s burritos and only cost $2.00. What a deal! 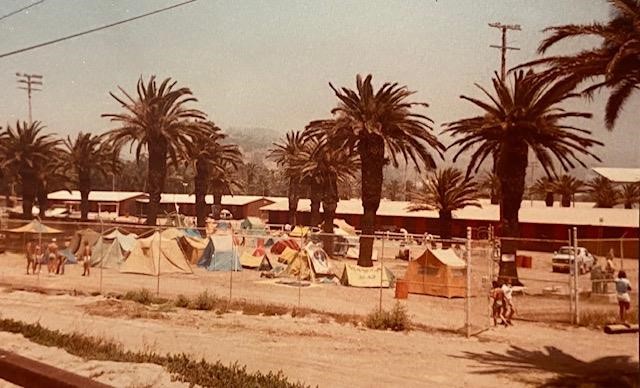 If one only brought a tent, it was very easy to find the perfect spot. Behind our incredible area was a beautiful estuary. This is where the ocean meets a small river and lots of different birds, large and small loved to hang out. The campers also flocked to this space and is is a highly sought-after area to this day. Being in the  back and away from the main parking/camping lot, the biggest bonus was the discovery of a small building that contained a shower. Talk about bliss! The only problem is that word got out and the line got long. But being the kind people Dead Heads are, sharing of the gift of a shower was the right thing to do. That shower area was only a secret for so long and after a couple years it was out of bounds. It is no longer available for use by festival goers, but when it was there were a few less smelly, sweaty and uncomfortable folks running around.

The 1983 Grateful Dead Shows in Ventura were some of the best shows and experiences that come to mind. They were not over managed, campers had room to spread out, and best of all, they were not discovered by the masses. Everywhere you looked people were just so happy to be on the beach and listening to the greatest band there ever was. Here are a few more pictures that made this event one of the favorites of West Coast Dead Heads! 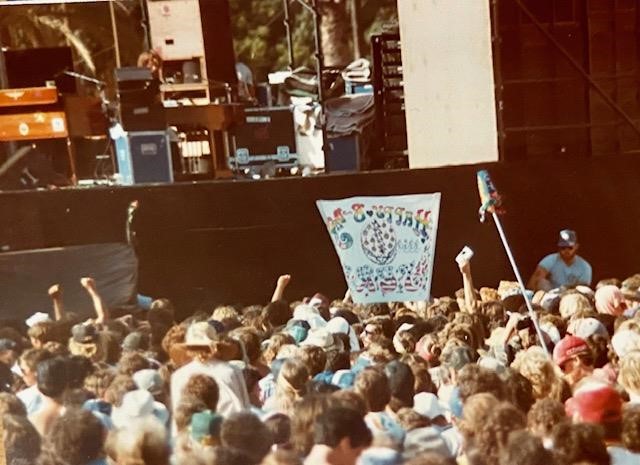 I got to give Jerry his Bday banner. Even Brent was checking it out. I remember him giving Kristy and I a thumbs up! When I went back to my spot at the base of the soundboard, I was invited to watch the rest of the show from the rail/edge of the soundboard frame. Nothing left to do but smile, smile, smile! 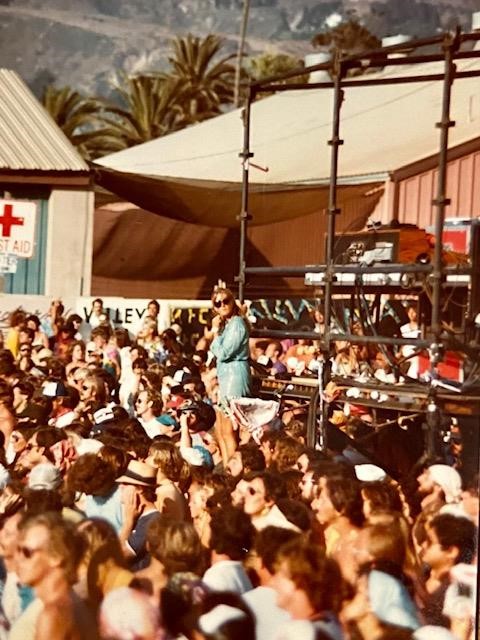 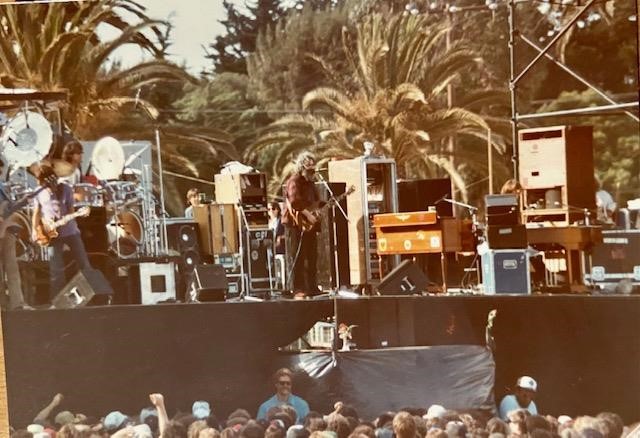