“The Grateful Dead was the adventure I didn’t know I was looking for,” photographer Bob Minkin related about his experience stumbling into the psychedelic music scene. A fixture with his camera on the sidelines at shows, Bob’s photos go back to the mid-seventies and most fans have seen them in magazines like Relix or Rolling Stone.

Bob grew up in Brooklyn, NY, and took an early interest in documenting the world around him. He got his first camera, a Kodak Instamatic, at 12 years old, and when he was 13, he met a new group of friends in his neighborhood that were into the music that would change his life. “They were into the Dead, Hendrix, Cream, and Allman Brothers. That was the Fall of 1972. By the following year I was hooked … I started getting into ‘real’ music and became captivated by the images in all the albums and music magazines of the day. The work of artists such as Alton Kelly, Stanley Mouse, Victor Moscoso, and Rick Griffin, to name a few, blew my mind,” he remembered.

The Grateful Dead were on hiatus when Bob started going to concerts in 1974, so he didn’t see them until 1976. In the meantime, he caught Legion of Mary, Jerry Garcia Band, and Kingfish, who were touring with Keith and Donna. With that Instamatic, he began to take his first concert photos.

“In the spring of ’77, when I was in high school, a friend introduced me to the publisher of Relix magazine who began publishing my photographs. With the credibility of a magazine behind me, I started getting more access and meeting people such as Ren Grevatt, who did PR for Monarch Entertainment. That company was headed by John Scher, who ran the Capitol Theatre in Passaic, N.J.,” Bob explained.

His creative impulse continued to guide his way, and he went to the School of Visual Arts in NYC to study graphic design. Selling his photos in the parking lot at  shows to make money to help pay for being on tour, Bob charged just $2 for his 8×10’s back then. Leveling up, he shot on 35mm with a Konica rangefinder and then finally with an SLR, Minolta’s SRT101. In the mid ‘80’s he bought his first Nikon, an FM2, and along the way he met some of the people from the Dead office which gave him an opportunity to show his photos to the management, including Rock Scully. The access boosted his visibility and in 1985, he met the band’s new publicist Dennis McNally. “He and I hit it off and the rest is history, we continue to work together to this day,” Bob recalled.

Along with shooting the Dead and other bands, Bob develops websites for music and business-related clients. His websites include this site for Wall Of News and other music-related ones such as the Grateful Guitars Foundation and Cripe Guitars. In the oughts, he was the chief package designer for Grateful Dead Productions, creating artwork and designs for “Dick’s Picks” Volumes 25 – 36, the Vault releases, and various boxed sets. 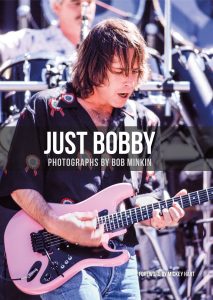 Bob has self-published three beautiful photography books, Live Dead, The Music Never Stopped and Just Jerry. His latest book converges on Bob Weir and will be available this May 2022. “After Just Jerry came out in 2019, I was kicking around some future book ideas and my wife Anne suggested, ‘how about a companion book focused on Weir, call it Just Bobby?’ Boom! That was it. A great follow up to Just Jerry and a perfect opportunity to show some love for Bobby,” he shared. Shooting Bobby since 1975, Just Bobby will have 192 pages of live and candid shots, off-stage photos, unpublished and rarely seen images in a hardcover, large format book.

One of his favorite images of Bobby was shot on that old Instamatic. Bob remembered, “This image of Bobby brings me back to 17 years old on an early Grateful Dead adventure with my buddy, and my first time on an airplane to Syracuse, NY. We had no tickets, no place to stay, no idea where the band was playing. A patient cabbie drove us around ‘til we found the venue, Onondaga County War Memorial. Tickets were procured and it was a lysergic night for us. After the show we had the idea to meet the band, so we went around to the back door where the crew was loading out. Lo and behold, 28-year-old Bob Weir comes walking down the stairway and I snapped this image with the Instamatic. This show was released decades later as “Dick’s Picks Volume 20”, one of the packages I designed for Grateful Dead productions!”

Today Bob uses a Nikon D850 and shoots bands like Dark Star Orchestra, Moonalice, Dead & Company, Steve Kimock, and David Nelson Band. You can catch him working at music festivals like Skull and Roses and venues like Sweetwater Music Hall.

He shared, “I see myself as a documenter of our music scene, a sort of ‘keeper of memories.’ The scene around the Dead is as important as the music. I love capturing the joy and tour life of my Deadhead family.”