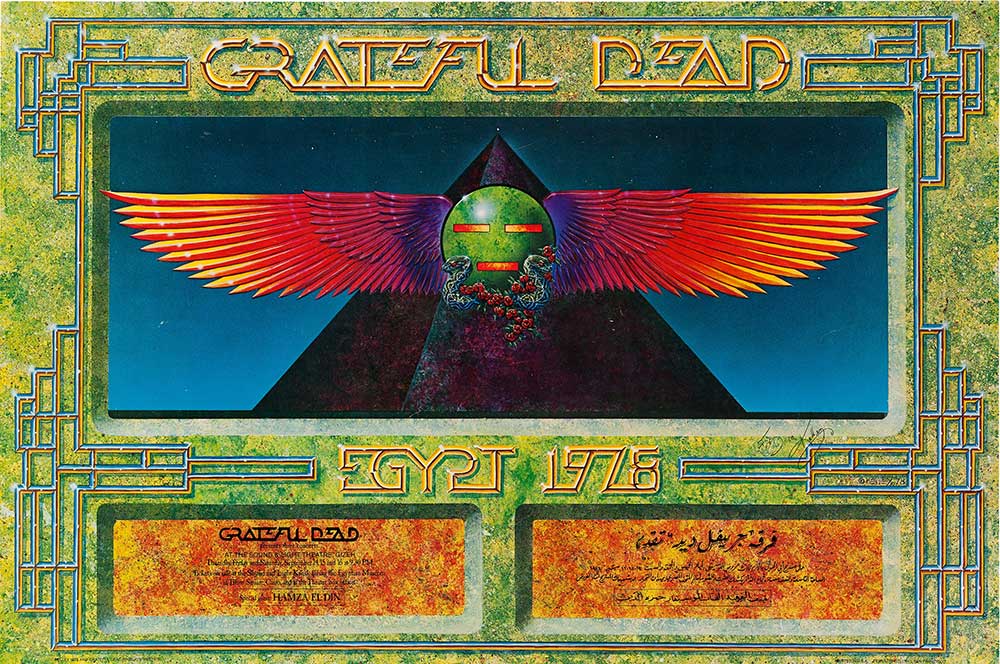 From an interview with Bob Weir and monitor mixer Harry Popick. July 18, 1984, a few stories about the Grateful Dead in Egypt.

HP: I took an awful long time to set up, because it was so brutally hot that we could basically only work at night. And it didn’t cool down that much. I went to move speaker cabinets and they were melted to each other…

BW: A lot of the wire that we got to run from place to place was World War I surplus Italian wire, if you can feature that. That was what they had, the state of the art in Egypt…

… We didn’t play our best. It was too damned hot… I think Madame Sadat saw to it that everybody in Egypt was going to love the Grateful Dead, and by God they did. Her children’s charity benefited. Surprisingly quickly after we got back, we got reports and documents of what had been done with the funds. Mostly it went for soccer fields for the kids in little villages up and down the Nile.

And of course, there were 4000 Egyptians there every night.It was not like playing to a bunch of Deadheads. At the beginning of the show the Deadheads would come to the front of the stage like they do. By the end of the show on every given night, the complexion of the audience had quite changed. It was considerably darker, and the hair was a lot curlier. And the Egyptians that came got right into it.

HP: Many people weren’t quite sure what was going to happen…

BW: The Egyptians came and took their seats. When they saw that the Deadheads all ran down front, they figured “What’s this?” They sat down and waited for the concert to start, and after the concert got going they got up. There was a space between the seats and the stage — a big one — and they filled it up, crowded the Deadheads out.

HP: It took me three days to get ice. They had a big ice house right nearby, and I had requested ice, but I don’t think they knew what we meant, why we wanted ice, or what we were going to do with it.

I wound up getting one of our cab drivers that we had hired for a week. He didn’t speak English. We drove into Cairo, and we drove around town until I saw buckets. I stopped the guy, and I went, “Them!! I want them!! [counting on fingers] Four, five, six!!”

He went, “Okay!” We drove a few more blocks, he parked, he said he’d be right back, vanished, went down an alley. He comes back in 15 minutes with six buckets. Great, we’ve got the buckets.

On the way back to the pyramids we stopped at a store for beer. I knew how to say beer; he knew what beer was. We got cases and cases of beer. And we finally got ice. He knew what we wanted to do: fill up the buckets with ice and make the beer cold!

BW: The English drank beer, but the English are gone. Egypt is Islamic, and they don’t drink that much beer there. They have one government-run brewery, and you can get one kind of beer there. It’s called Stella Beer. They import beer, but it’s real hard to find.

HP: I went out to Sahara City, and they had a bar. We asked for beer, and they came out with canned Heineken.

BW: I remember that being a special treat the night we rode out there, but mostly it’s Egyptian beer — and they don’t drink beer, they just have it for the tourists. So they don’t know what to do with it – like put it on ice, for instance.

HP: Another funny thing: I was running around with my Super-8 camera on the stage. Once we got all the ice distributed and everything was chilling, there were people hanging around the ice buckets like people would hang around a fire. It was so hot there that people could feel the coolness. I’ve got footage of people sitting around a bucket of ice with their hands out as if it were a fire… I know they didn’t realize they were doing that.