Excerpt from This Is All a Dream We Dreamed: An Oral History of the Grateful Dead by Blair Jackson and David Gans, published by Flatiron Books. Signed copies  are available from http://perfectible.net
Interview by Hank Harrison in May, 1970

I remember on the way to the Portland Acid Test we all got in the bus. We were roaring up toward Portland. Neal was driving and rapping into the microphone like always, giving us the sights. So, up by Maxwell, California, we burned out a back wheel bearing and had to stop at a gas station. We were stuck there for nearly 24 hours. The guys at the gas station, shit, they didn’t know what to say [when we pulled in]. We were trying to get some back-end bearing for the bus and fix it. They had enough equipment to lift it, and all that schtick. Didn’t work. But during that time when we were waiting there, we took a couple of electrical cords and threw them out the window and plugged them into this outlet they had on the side of the gas station, and turned on all the tape recorders and guitars and the whole thing. 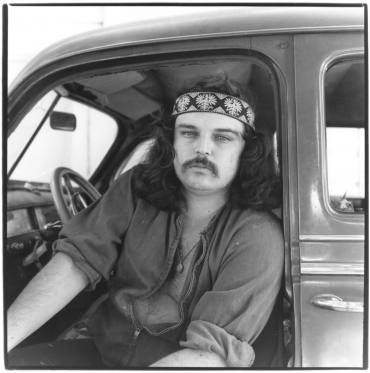 Finally we decided it wouldn’t work. It would take too long. We had to get there. The bus couldn’t get fixed. So we rented a truck — one of these big Avis or Hertz trucks with a big box on the back, and it had a slide [ramp] that came out the back end. So we put all the equipment and everything inside the truck. And we had a generator that we tied to the back of the slide, which we left sticking out a few feet, turned on the power, rigged up lights on the inside of the box on the back of the truck, rigged up an intercom system between the cab and the back, and took off for Portland… leaving the bus [at the gas station]. There was nothing anybody could steal, and the bus wouldn’t move. We got up to Redding… past Weed, there was a blizzard and I was sitting up in the front with Neal, who was driving, and we had this big speaker in the front so we could [talk] back and forth with the guys in the back, who were cramped up like sardines with all the equipment. Ann Murphy was sittin’ between me and Neal, and I had my feet up on the speaker. So there we were roaring up through this windy mountain road, with snow drifts eight or ten feet high on the sides — icy roads and a blizzard — and Neal is like one hand on the bottle of wine, the other hand poppin’ speed, and the other hand playin’ with Anne, and the other hand talkin’, and the other hand drivin’ the truck… and on and on and on. [Laughs]. There it was, man. “Aaaugh! Give me some of that wine, quick!”

It was a good trip. We finally got to Portland and found the place and went in and it was still snowing. We went in there and set things up and I spent quite a bit of time in the cloak room sleeping on the floor with about nine other people.