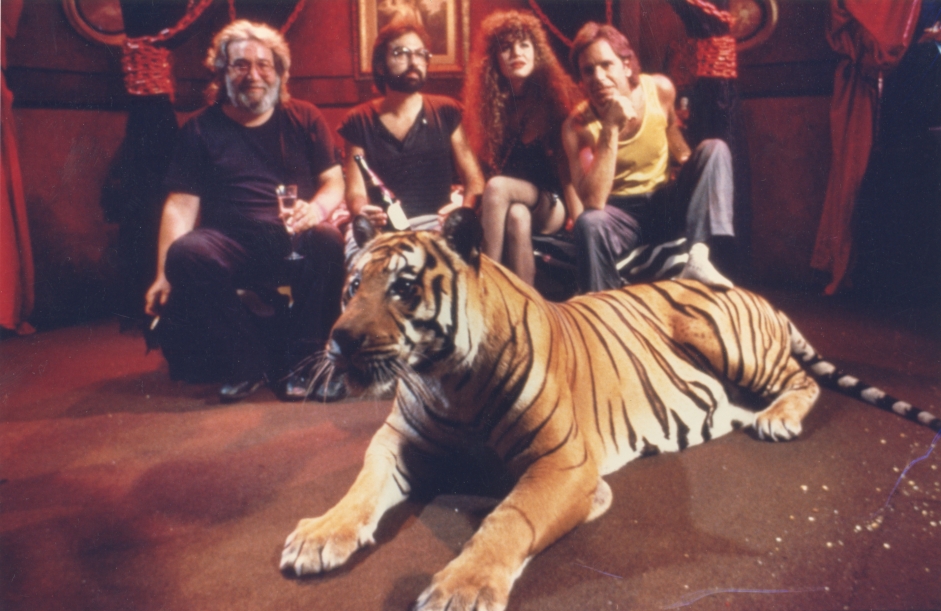 Director Len Dell’Amico talks about making the video for “Throwing Stones” in 1987. It was the third video from In the Dark, after “Touch of Grey” and “Hell in a Bucket.”

Len Dell’Amico: We had our production manager scope locations for an “end of the world” kind of set. He came up with three or four, and we centered on this abandoned school in Oakland because it had a giant wall that we could paint. The mural is a symbol of the dystopian future that Barlow is threatening in the lyrics.

I think it was just Garcia and me at the kitchen table in the office on Lincoln. Jerry took out his pen and drew this giant figure on a napkin – a little reminiscent of something out of [Pink Floyd’s] The Wall. He was brandishing barbed wire, and there were explosions around him. It was scary. I’m like, “Great, I’ll hire a mural company and they’ll transcribe it onto that wall. It’ll be 60 feet tall by 80 feet wide” or something ridiculous like that. We found a company that was game to do it. We said, “You’ve got 48 hours.”

I didn’t see it until we arrived on the day of the shoot; I was just too busy doing other stuff. I just trusted them that it would be good, and that it would be there at all. They reproduced what Garcia drew to shocking fineness. It was like, “Oh my God, that’s exactly what he drew on the napkin!”
I’m pretty sure that the company that did it still has that napkin, because I don’t have it. It would be worth quite a bit!

Veronica Loza, who was the editor on these videos, was going to be my assistant director that day. The morning of the shoot in Oakland, the two of us would show up at Jerry’s house and pick him up at 8 in the morning and go over together.

I’m not good at 7:00, 7:30 in the morning, but you know, you’ve gotta do what you’ve gotta do. We go over there, and he comes bustling out of the house all bushy-tailed and bright-eyed, unusually bubbly – and he wants to drive. So we all got in his Beemer.

There was smoking going on in the car – just cigarette smoke. He put in an audio cassette of Jackie Mason. He had seen Mason on Broadway. It was loud and it was a live tape, so it was like you were inside of an auditorium listening to him. The entire drive to Oakland, we’re listening to Jackie Mason and laughing our asses off.

We pull into the location and all of a sudden it hits us: “We’re making a film today, and there’s a crew that’s been here for three hours building the set!” but we were off in Jackie Mason space, you know.

We get out, and the smoke comes billowing out of the car, and we have tears from laughter. I thought, “This doesn’t look good. It looks like we were smoking pot on the way to the shoot, and why are we laughing?”

Film sets are often tense, and I always work against that. I don’t think there’s any reason for anybody to be stressed out. I mean, it’s just television. It’s just movies. It’s not warfare. The worst thing that could happen is we don’t get the shot we want…. That was always, and still is, my philosophy in production. I learned it sitting on the stool with the Grateful Dead in 1980 when they made it very clear that that was the operating philosophy and you’d better fit into that: We’re here to have fun, and if we get what we’re supposed to get, that’s secondary to having fun doing it. So, after Dead Ahead I took that as my own approach. It always worked for me, and people I’ve worked with usually come away saying they had a good time. I always thought it translated pretty good onto the screen.

This crew had been working there for a couple hours, and we were maybe 15 minutes late and that wasn’t good. I could see the first impression that we made wasn’t too good. They had these smoking tires and mountains of garbage and stuff all spread out. It was magnificent, but the first thing we see in the distance is the mural and Garcia was just like dumbstruck. Like, “Oh my God, look what they did!” in like 48 hours. It was big and creepy and very effective.

The idea was that we’d have all these little kids in the bombed-out classroom, working on a very colorful mural with kiddie stuff – animals in the jungle. In the end they would attack the mural with balloons of color; this was the hopeful idea. Among the kids were Brent’s two kids, and I think some other kids from the office and maybe other band members.

Billy couldn’t show up; I forget why. That was kind of a panicky thing, because you want all six guys. They were dressed in Australian dusters and of represented the evil forces that are mentioned in the song. Robbie Taylor, the band’s production manager, volunteered that he could do Billy. “What do you mean, you can do Billy?”

“I know how he walks. I’ve watched him walk a lot.” He was the right size. We just put a little pillow on his belly because Taylor was very skinny. It looked like Billy.

That was an all-day shoot, and it went pretty well. Bobby is a masterful lip syncer; he actually sings hard while he’s doing it, and that makes it look real.

This was the song that brought me to them in ’84 and made me want to do whatever they wanted to do. Garcia had sent me some tapes, and there was “Throwing Stones.” I was struck by what a unique melody and structure it was. Weir writes songs that don’t sound like anybody else’s. Then the lyrics – “Wow, here’s a pop group just taking what’s going on head on” – it was political and environmental and pulling no punches. I wanted to help them in any way I could, if they wanted me to help them.