I’m the drummer. And before drums, I learned keyboard organ for three years. Until I saw my teachers fall asleep on me. And then I just saw someone playing drums. I think it was like Motley Crue or something, Tommy Lee. And before that, I listened to my uncle’s albums—Led Zeppelin, Black Sabbath, all that stuff. And I became, basically, a metal head like Van Halen, Metallica, Iron Maiden and so forth. I saw Metallica three times in one month and it was the same set list every night and I was bored, so my friend says you should check out this band, they play a different set list every night and I was like, what? And he gave me a tape. June 28, 1985, Hershey Park. And it sounded horrible. I couldn’t even really hear it, but the song that really got me was “Looks Like Rain” and I listened really hard to it and I was just totally blown away by the whole song. I could feel the rain listening to it just from the way they delivered it that night and it was just truly—I got to go see a show. I got to get more tapes you know. And I got hooked.

I was hanging out with a friend that always played bootlegs. You would never hear his radio. It was always a different cassette. And I was like this is weird. I went to my first show in ’91 on my birthday, at the Cap Center in Landover, Maryland. And what I remember is the “Stir It Up.” It was one of the rare ones, yeah. There was a “Stir It Up.” There was a “Victim or The Crime.” There was a “Scarlet Fire.” It was, yeah, pretty amazing. And from ’91 to ’95 I saw at least like 60 shows or so just in my area because I’m from New York. I am born in Queens, lived on Long Island. Left from Rockland County. And now I’ve been living in Vegas for over twenty years. My parents were retiring out here; but, you know, I’d had enough of New York and stuff and we wanted to go travel and, you know, just check it out. We were actually going to go to California but El Nino was hitting or something, so we stopped in to see my parents and here we are. It was me and my ex and stuff. And, well, first, it was very different. You know, I wanted to get out of here right away. I’m not a gambler and I like the greenery. So it was kind of weird. I wanted to get out of here as soon as possible, but obviously it never happened. It was a little vortex here in Las Vegas if you look beyond superficial. 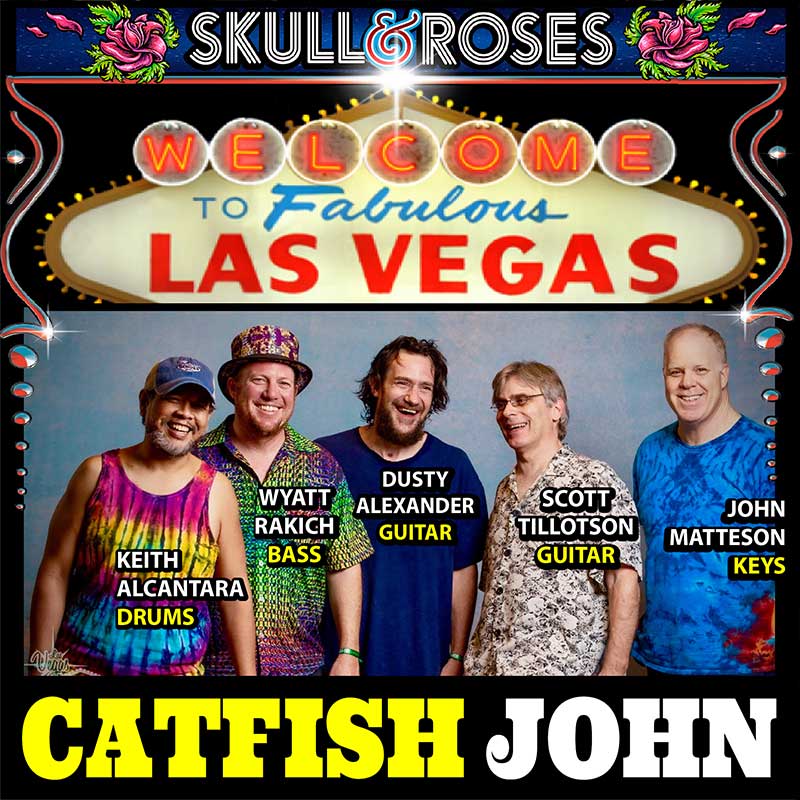 But back to drumming. Of course, Mickey and Billy are really important to me. They’re truly amazing. I mean, not too many double drummers, and not too many people know that it’s not easy to play two drums together. There is some kind of unspoken connection that you have to have as well as practicing it together—because it could get really discombobulated if you’re not both on. Or the way Billy and Mickey play it, they’re kind of talking to each other. You know? That kind of thing. Conversing and stuff. It’s—it’s definitely not an easy thing. That’s for sure. When I first tried to understand the Grateful Dead, I started realizing they were playing every genre in their own way. I was like, what is this. And even the weirdness and the drums. You know? It’s what Phil says about the fingers and the hand are all together. They work together. We used to have two drums in Catfish John but now we only have one drummer. He wasn’t a Dead Head, and he didn’t know the songs as well, so he was just like playing behind me. But if a drummer came along that knew the songs I’d be open—I can put my ego to the side and stuff. I’m in circles too. I’m a part of drum circles. I’ve been doing, what do you call it, a music program for nursing homes for years with drums. 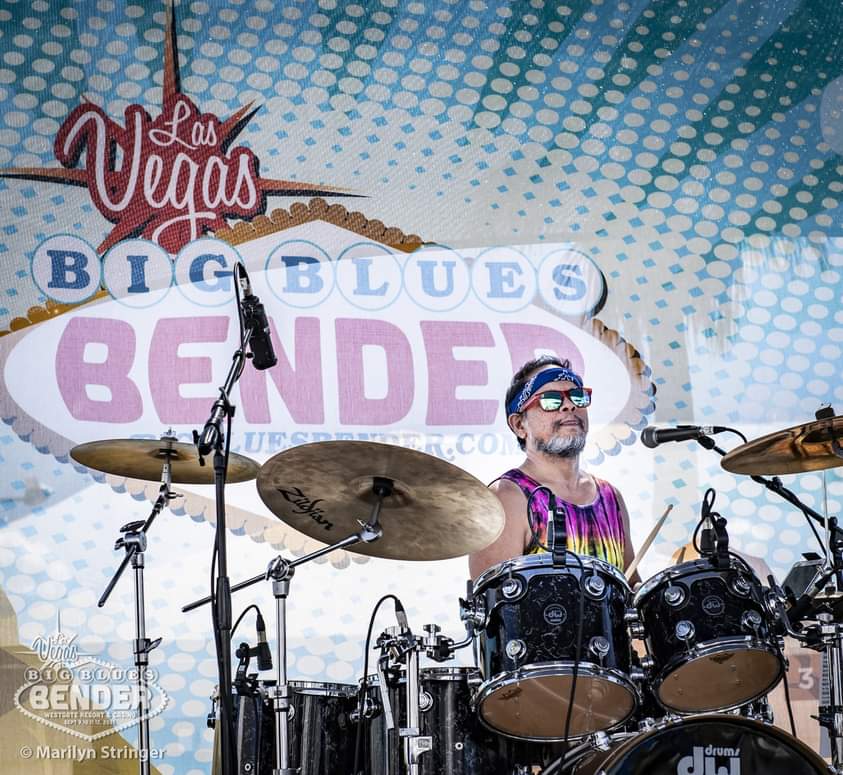 So I stayed in Vegas, got to see the end of a famous Dead Head bar called Legends, which ended, obviously, after Jerry. I found other heads, but there was no Dead Head band in Vegas that was doing it all the time. And then I got to befriend all these people that were deadheads, and I just kept talking to them, especially musicians, like “we got to start a Dead Head band, because this place needs it.” You know, that kind of thing. We need it. Every time we saw each other it was like, dude, when are we going to start this Grateful Dead thing. You know, let’s do this already. Still no one’s doing it. What is going on?

I just want to play—it was almost like my urge to just want to play Jerry songs and Grateful Dead music, and I still want to do every song at least once. And we all know how much catalog there is with this stuff. Finally in 2014 we got Catfish John started. And the Dead Head scene has really grown in the past few years—it’s like people need it now.

Skull and Roses is such a great idea. it’s just the reaching out to more Dead Heads, just reaching out to each other all the time and making our Dead Head world kind of—because I definitely miss the circus. I love being a Dead Head. It’s the rainbow perspective. I don’t know if you’ve heard of rainbow gatherings. A lot of Dead Heads have heard of rainbow gatherings. I’ve been to at least almost ten rainbow gatherings now. It’s one of those things of how amazing and resourceful humans can be without nothing and still care for each other. We govern ourselves and that’s the rainbow perspective. And, you know, just getting along. Peace, love and Jerry. Right?

Of course, the pandemic changed everything. I thought it was serious or weird at least when they started announcing concerts and sporting events were stopping. That was truly odd to me. I’m in a town where entertainment is almost everything. But we were lucky, because we had a venue outside which was at Ben Jammin’s place [Ben is a famous tie-dye maker. His store is called Jammin on Vegas.] and he’d just got it and it’s basically an old garage and he has a venue outside in the back parking lot and we were playing shows there just keeping it outside and keeping it minimal and all the safety protocols that we’re trying to do just to still have live music.

Ben had been in San Francisco but he was from Vegas and came back. Actually, I met the mother before I met the brothers. And the mother was the one that initiated getting us a beautiful tapestry that they made for us in the beginning of our birth as Catfish John. 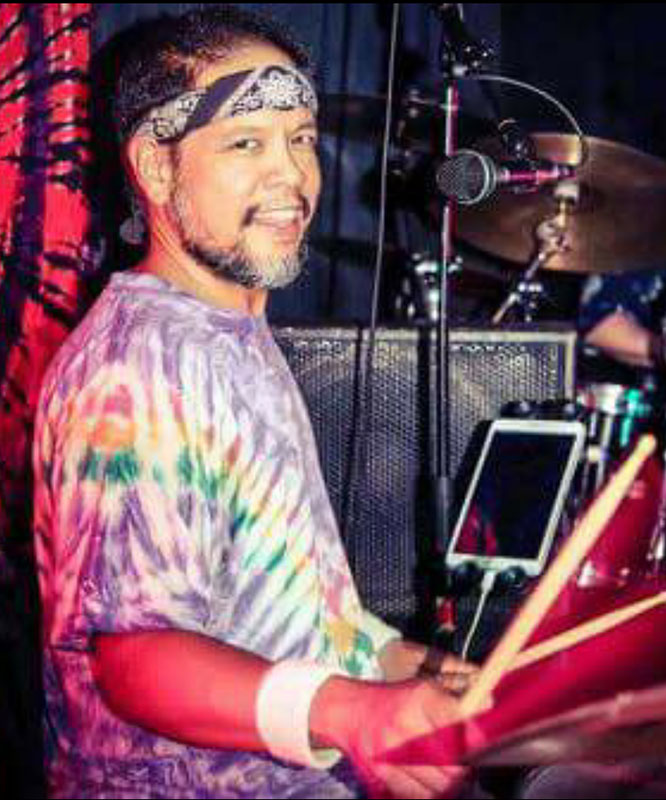