I was born in Texas, raised in New York, but I’ve been in Atlanta since high school. I never left, because the music scene is so rich here. I’ve toyed with living in other places, but Atlanta draws me back every time because of the wonderful, supportive music and art community. As we say here, there’s just something in the water here.

Our ties to the Dead are rich here as well, maybe due to our proximity to the Allman’s/Capricorn scene in Macon. Oteil and John Mayer both came out of Atlanta, Colonel Hampton, Jimmy Herring. We’d see Oteil and Kofi at parties, they’ve jumped onstage with us at shows.

My parents played guitar and they were okay at it. When they went to bed, I grabbed their guitar book and essentially taught myself. Got my first guitar at age eight. I was finally able to make a true barred F chord a year later—I’ll never forget the guitar shaped cake my Dad made for me in celebration of this achievement.

After college I started forming bands and writing songs. I found I really liked being part of the drum section, supporting a lead and affecting the syncopation, so rhythm guitar became my focus; or second guitarist maybe, because my style is not strictly rhythm. I have been studying Bob Weir-style guitar since the beginning. It is cerebral and intelligent, and all over the neck. Half the chords are upside down and backwards. I love it because it’s a challenge. And I love that adding syncopation is the secret weapon in getting the audience dancing.

I saw my first Grateful Dead show at 18, in the ‘80s. I didn’t get it right away… it struck me as bluegrass with loose vocals, and as a legacy Beatles fan, the long jams confused me at first. But I was intrigued by the hippie scene and the kindness of the community, so I stuck with it. I learned to listen for the communication between the players and the spaces between the notes—much like you do with jazz. But there was a specific moment where it all came together for me—maybe one we all had at one point: There was a show at Richmond in the ‘80s where they did “Lost Sailor” into a “Drums and Space,” which finally sequed back into the “Saint of Circumstance.” I came out of that sequence with a new understanding of music… it felt as if my entire world and mind had opened up.

And here’s what I got. It’s like you have to learn to let go. I suspect the reason the Dead can make some non-fans uncomfortable is because they are used to knowing where a song is going, the familiar, finite patterns they grew up with in blues or pop. In the Dead’s music, you have to learn to let that ship leave the shore, enjoy the ride, and trust that the music will eventually find its way back. You have to allow yourself, as a listener and a player, to let go… trust your bandmates, and add and respond to their musical contributions in real time. Improv is all about trust, and faith, in a way. The lessons I learned simply by studying the Grateful Dead’s music has served me in almost every other aspect of my life! 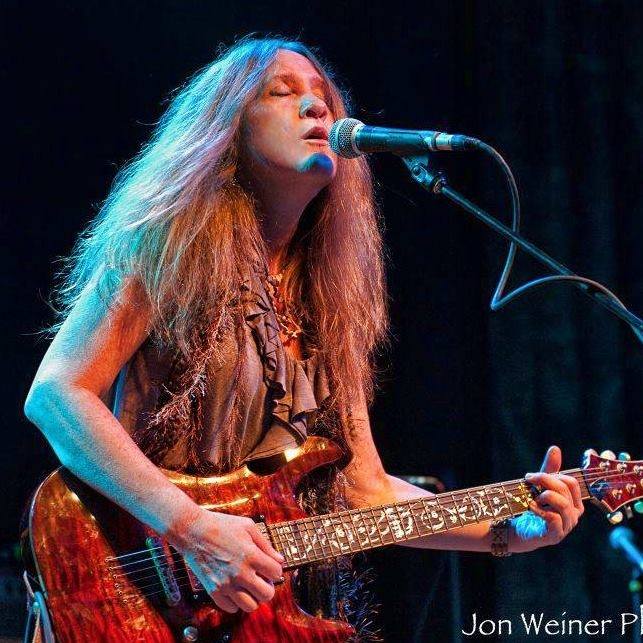 And that’s why this music remains a passion—it’s about the connection for me. The closest thing to God or spirit that I know of is that feeling of being part of something greater than myself, co-creating in real time with five or more like- minded artists. I do it for that. And whether that happens on a big stage or down in a rehearsal room playing just for ourselves—it doesn’t matter, as long as I’m having fun connecting with my fellow musicians. The Dead used to refer to the “7th member”…that entity that would join them in the deepest, best jams. There really does come a moment you can feel, when it’s just right, that the music seems to play itself. That’s what I hope to find, and those are the times I feel most alive. We call it church, for good reason.

I’ve played in many Dead bands. Some of them looking to copy the sound, and some looking to put their own spin on it. I prefer the latter, because I believe that was not only the intent of the writers, it’s also how music stays alive and authentic. This music is a guideline for expression, not a museum piece. I really like how John Mayer described it. He did an interview which I thought was on point where he was describing his learning process. He first studied WHAT Jerry played and said that got him part of the way there. But then he went back to the beginning and asked himself, WHY Jerry played what he played right there. What he needed to do to express the right emotion to that particular lyric, etc.. that was the important revelation. It shows in his playing, for sure.

While my main band Deep Blue Sun writes and plays original music in the vein of the Dead, and we’ve headlined Jerry Jams and similar fests (with Oteil a few times), we aren’t a dead cover band exclusively. I do play in a great acoustic Grateful Dead band called String ‘n Bones out of Atlanta.

I came to Brown Eyed Women as the last addition. The way I understand it, the (newly forming) Brown Eyed Women band was set to launch, possibly without a rhythm guitarist, since female players who study the Bob Weir style are apparently pretty rare. But at the last minute the manager heard about me after a conversation with the band Frankly Scarlet, who I was playing the Bobby role with at the time. Saint of circumstance, you might say. I drove down to Florida for a try out, I guess I passed the audition. What a cool opportunity to do this on a national level!

Our first tour, we meet for the first time at the rehearsal studio, introduce ourselves, rehearse several hours and next day we’re playing our first gig in front of hundreds of people. Talk about a crazy challenge, to attempt this music essentially without much marination time that you need to learn each other’s nuances, but it worked out great. We are literally learning as we go, on stage. It can feel a bit naked to be working it out on stage – what you see is what we’re seeing for the first time as well, and we can’t always be sure what to expect. But we do our homework and come prepared prior to the tour, and then on stage, when we let go, trust and communicate musically, we are hitting some really exciting, unique moments. The audience is obviously resonating with it as well. We’re all in it together, and so far we’re really enjoying the ride.

My pandemic experience is a little different from most people’s, because I caught it early before one could even get a test. It was in the end of February, early March, right before the shutdown. I had all the symptoms and a lingering cough where I couldn’t breathe for six months. When the world stopped, it was kind of like musical chairs. Wherever we all were at that moment in time—that became our reality for a year.

I felt terrible for the people like my brother who were caught in a one bedroom highrise apartment that they couldn’t even leave. I found myself in a lovely ranch home with another musician, and we both loved to cook; so honestly it was almost like a weird holiday for us introverts. Never thought I would be able to have life hand us a “break” from the never ending race.. So it really wasn’t so bad for me. I know some people suffered through it.

But in the meantime, me and some techie friends decided we had to find a way to play online. So we spent the first five months trying to figure out how to get past internet latency, meaning that delay between playing a note and somebody else hearing it on the other end of the Zoom. After trial and error we figured out JamKazam and were able to play and produce remote virtual jams online, with six people all in separate homes. It was a tech hassle though – it would have driven most people crazy, but hey, we had time to kill. We made some great Youtube videos as a result.

I didn’t have as much free time as others during the pandemic. I’m self employed, doing photography and digital media as a day gig. It just so happens that my main client creates social emotional elearning courses for school children—teaching respect, coping tools and compassion for students who need help in this area of life. So when COVID happened, naturally this curriculum took off. So I never got as much of a “break” as some did, I suppose.

During the end of the pandemic though, we knew the Brown Eyed Women tour was going to come, so I turned my attention to really learning, just really taking the time to study Weir nuances even more than I had. I had previously felt that there were maybe three or four different variations of an A minor chord. Turns out there are like ten or twelve – just to begin with! So I spent a good bit of any down time I had running these new inversions, as they’re called, every single inversion all the way up and down the neck. It was fascinating work. Now when I’m on the stage with the girls and I hear Joni playing down here, I play up there, you know, without missing a beat. So I’d like to think that if anything, maybe the pandemic helped me be better musician. I know I learned how to be a better cook! And now that we’re emerging—everybody I’ve seen looks healthier, ironically. More rested and they’re eating better, because they’re eating at home.

Playing again has been so great. Luckily, the band re-gelled pretty easily. As always, by the end of the tour, we achieved those moments where it was seamless and the music was playing itself and if you can even get a couple times that in one fourday tour, I consider that a win.