Part One of Two, to be continued

Trina Calderón is an LA-based writer, proud to be a part of the sunshine daydream of the Grateful Dead. 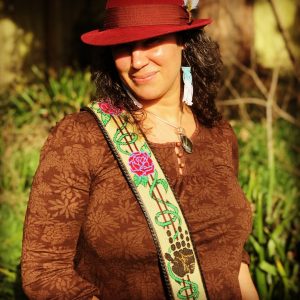 While we watch and listen to a band onstage, playing their story through song, there’s so many other narratives happening—within their technique, instruments, and even fashion. Take a guitar strap, functional but also an extension of the player’s body and literally part of their flow playing music. Oregon-based artist Jenny Shuman honors this exchange with her vision and collaborative energy, creating beautiful custom-beaded guitar straps with a story.

Growing up in Michigan, Jenny’s artistic aesthetic was forged from the psychedelic music community and her native Iroquois culture. She frequented Pow Wows and, inspired by a gifted beaded necklace, took up beadwork. Starting with fundamentals of geometric design and no graph paper, her early designs were simple and SouthWestern native. Fashioning necklaces, bookmarks, and bracelets, Jenny toured the state’s Pow Wows selling her beadwork alongside a food booth and a cousin who made peace pipes. Over time, with bigger looms and more space to include depth and shading, she made tapestries.

In 1997, Jenny saw Neil Young in concert on TV and noticed his leather native guitar strap and knew she had to make straps. Her first full-length loom strap was for Neil. She recalled, “I went to his concert and I had friends who were security guards. I was like, ‘please get this to him.’ Honestly, I don’t even know if it made it, the security guard was like, ‘I gave it to somebody on his crew and hopefully it made it!’” In 2006, backstage at a Blues Traveler show with her friends, Chandler Kinchla asked Jenny if she did straps. “I was like, absolutely. He says, ‘alright, I want it to be dark, tribal and punk. I want it to have this,’ and he takes off his shirt and his whole back is like this big tattoo. Instantly [my] wheels are turning, and I nailed it. His strap was beautiful. My first strap for a musician on stage, and he has three now,” Jenny beamed. 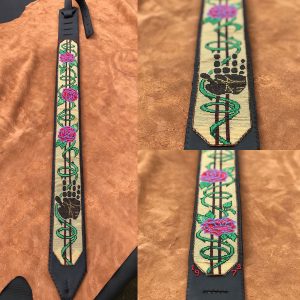 “Beadwork by Jenny” is available on Etsy and was mostly commissioned by friends and family. Always psychedelic, her style is shaped by the change of seasons and inspiring moods based on the juxtaposition of many different kinds of beads and color schemes. “I definitely go in fits of that color, fits of this color,” she said.