“… I’m Trekking across the hot Arizona plains with 8 crazy strangers I just met 4 hours ago …The Stereo system is blasting at maximum volume with the sweet familiar sounds of Ron “Pigpen” McKernan howling a wicked “Hard to Handle” from the classic Filmore East 71 show …  The passengers are united as one … “pretty Lil Thing let me light your candle, cause’ Mamma I’m sure hard to Handle !!! ”

The Speedometer is pinging.  The wheels smoke across the barren desert highway, spitting sand and gravel. The scent of beef Jerky and cannabis consume the vehicle….  The sign post up ahead reads:

“1/2 Mile to Tucson” and  THE ALLIGATORS are due onstage in minutes.  I cling for dear life…”

After emptying wastebaskets at the WALL OF NEWS for the first dozen issues, I pleaded with management to send me to the front lines to report on some of the heavy Grateful Dead action leading up to SKULL & ROSES in Ventura this April.

I wanted a first assignment… and they damn well gave me one.  My Mission: to shadow SKULL & ROSES’ House Band, THE ALLIGATORS on a blitzkrieg Arizona tour.  What I had received was a front row seat for the grooviest, full-tilt Rock n Roll Circus alive today.

Emerging from the swamps of Southern California, THE ALLIGATORS were created in 2017 to represent the legendary Ron “Pigpen” McKernan as the House Band for the inaugural SKULL & ROSES Festival.

The bands repertoire consists of high-octane, whiskey-soaked versions of the often-neglected Pigpen songs that are the bedrock foundation of the Grateful Dead.  They don’t stop there, however, and one is never sure what may materialize in their barn-burning performances.  The band lives every reptilian moment by one essential creed:

“The Alligators are here to rock you out and party all nite long!”

Their energetic stage show is anchored by lead singer, PETE CARONA, who’s unique style is Pigpen-esque, but in No way presented as an impersonation. The dual guitar assault consists of “Stevie Ravioli” on Rhythm guitar and Steven Kim – AKA “The Kimchee Warrior” on Lead Guitar. Chompin’ the keyboards and piano is “Berkeey Gator” and on  bass guitar is “J.J. Gator” Rounding out the rhythm section on drums is Richard LaChomp.

This band seems to have a strange fixation with food, it’s the topic of most of their conversations for long hours on the road. Constantly reliving memories of the fantastic meals they’ve enjoyed over the years. Keyboard Player, Berkey Alligator, is in charge of all feasts on the tour. He study’s yelp reviews af if it was The Tora. Meticulously Cross referencing Restaurant reviews in all towns, he never fails to assure these gators are well fed at chomping time.   As Berkey says: “An alligator’s life is too short for bogus meals, so only the finest will do.”

My ear drums are still ringing, my memory is a little hazy, but I finally caught up with Carona – or “PETE-PEN as he’s often referred to – after hours at 3:00 am sneaking in to the hotel Jaccuzi. Now in his happy place – taking in a late-night soak and a few pulls off his favorite night`cap Jim beam Bourbon – he briefly spoke of his band and his background …

“from very early on, I listened to everything there was on the radio.  My early favorite band was Kiss, and my father took me to see them at the (Madison Square) Garden when I was nine years old, and it was a life-changing experience; I got a taste of over-the-top rock and roll and never looked back. Then I got to Arcadia California, and it was game on! backyard bashes every weekend and everybody, including me, was nuts for Led Zeppelin and Van Halen.

The Dead came a little later on, in high school, and when it hit, it hit hard. I was then consumed with colllecting every live tape of the band i could get my hand on.That one Atlanta-85 tape with the 2nd set ScarIet /Touch / Woman Smarter , really knocked me out, but it was The Classic Europe 72 “Morning Dew” that floored me, and at that point i knew I was forever on The Golden Road.

I played in a few Local hometown bands but THE ALLIGATORS took on a life of it’s own. Pig Pen Purists may take a minute or 2 to get on board, as this is not trying to be a replica, no one could ever fill his shoes. But,This band is Rock solid, and it’s easy for me to go on autopilot. We’re so honored to be part of this scene, and love ramping up the PigPen Party in every town we hit. the crowds get bigger and bigger, and the Jams keep gettin sweeter and sweeter! and The gas pedal has been pinned to the floor ever since”.

The Alligators are reptiles of few words, but one thing is for certain – They sure do enjoy the ride! 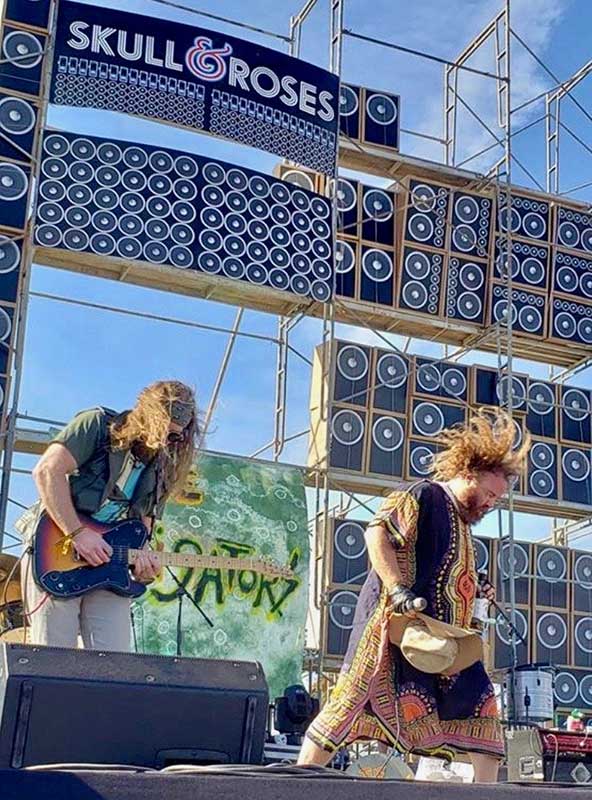 They play year-round spreading the gospel of ass-shakin’, Pigpen-fuelled, Boogie-Woogie, Swamp-Rockin’ Grateful Dead music on their annual migration to VENTURA.  A celebration not-to-be-missed, come chomp with them – and see you at SKULL & ROSES ! 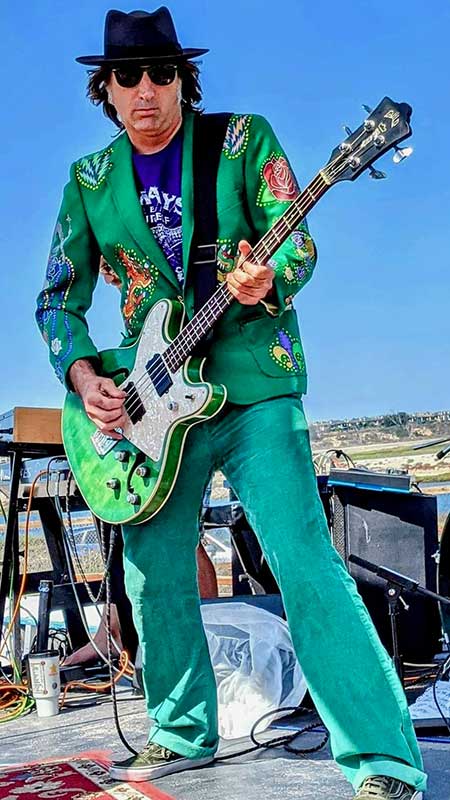