In the mid 1980’s, artist Dara Gerson was turned onto the Grateful Dead by her mom’s boyfriend. He played the album Workingman’s Dead for her when she was fifteen years old and she fell in love with the music. When she finally went to a live show, her life changed forever.

A self-taught jewelry-maker, she soon found herself on Dead tour selling her beautiful handmade pieces. “I would bring a little plywood jewelry display box filled with my creations and sell on Shakedown Street or out of my 1970 purple VW bus named, ‘Betsy.’ I made dreamcatchers, peyote stitch dread wraps, and beaded crystals. I traded for tickets, and made money to get from show to show,” Gerson remembered.

Inspired by mother nature, a little vintage style sense, and rock ‘n’ roll, she went from selling her creations on Shakedown to around three hundred stores internationally. After meeting her husband Ashley at a trade show in New York City, they formed Alkemie Jewelry.  It’s truly connected to the Grateful Dead vibe and the cosmic art community. Devoted to using materials that don’t harm the Earth, the original metal they used was from non-conflict bullet casings from shooting ranges. “But only one guy would cast this for us because of gunpowder remnants, and as we grew, we had to switch our metal,” she shared. Today, their Alkemie pieces are handmade in downtown Los Angeles out of a 100% reclaimed metal blend of copper, sterling, and zinc.

Gerson explained that her intention with her art is, “to create power pieces that make someone feel powerful and beautiful and keep our footprint small on the earth.” So when she heard Bobby Weir was having some health issues a few years back, she felt called to make him a piece filled with prayer and gratitude. “I charged it in the full moon and infused it with prayers for his wellness and healing. I had a trunk show in Mill Valley and brought it to give Larry the Hat to pass onto him from me, and a few weeks later he sent me a pic of Bobby in our piece.”

A few years later she was at the Jimmy Fallon Show when Dead & Co. played.  After the show she ended up backstage and not only was Bobby wearing her bracelet but he told her he felt the magick and good energy in the piece and that he wore it every day. So much so she’s had to do some repairs and he’s continued to wear it on Dead & Co. and the Wolf Bros. tours.

Gerson houses Alkemie in a mobile shop I like to call the cosmic owl truck. Using mostly reclaimed materials, the whole thing is built around antique 120 year old church windows that were turned into the sliding back doors. An artist created their custom designed moon and rainbow sun kaleidoscope windows, and another craftsman hand carved the barn owl door. “We built the shoppe with intention and lots of love. We literally even built our intentions and prayers for those who walk thru the door into the four walls. Our kids helped out too, sanding and tung oiling. It was a family affair!” Gerson exclaimed. 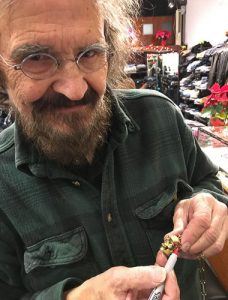 The cosmic owl truck has been parked in Topanga Canyon, on the Malibu pier, and at other cool events. Stanley Mouse even designed their fun psychedelic art nouveau logo. They carry their entire Alkemie jewelry collection, crystals, organic beauty and cbd wellness products, vintage curated curiosities, incense, candles, and sacred objects on the truck. Outside, there is a “wishing swing,” and people are inspired to feel better once they have walked in thru the owl door. It’s a cosmic artisan experience unlike any other.

Gerson related, “We are proud to say we make things from materials that are already abundant on the earth and don’t do any fresh mining on our beloved mother earth.”