One doesn’t often get to relive magical moments twice in their life under the same context, but I was lucky to have been at all the Ventura
shows, and now have attended Skull and Roses as well. Not much has changed at the Ventura County Fairgrounds. The grounds are still full of the same dusty dirt, barns, paddocks, and out buildings. There are some areas that were once accessible by Dead Heads that are now closed.

If you were not at the 1980’s shows and you are now attending Skull and Roses, the set up is very similar to how it was back in the day. There are nooks and crannies throughout the grounds that bring  those memories alive, and being able to camp in familiar places, with new and old friends, is one of bliss. For those who missed the Ventura shows or were not even born yet, and are attending Skull and Roses, might I suggest you take your time here, look around, feel the incredible energy that exudes positivity, appreciate your surroundings and take care of this extremely special corner in the world. We are all so lucky to be able to come back and experience this place many of us call HOME!

The Soundboard has been and always will be my “go to” place for shows. For me, I am all about the music. I learned early on that if you want the best sound you must go to the place where the sound is mixed. Plus, on extremely warm, sunny days, the soundboard provided the only shade for a while. As the sun moves, so do the people! 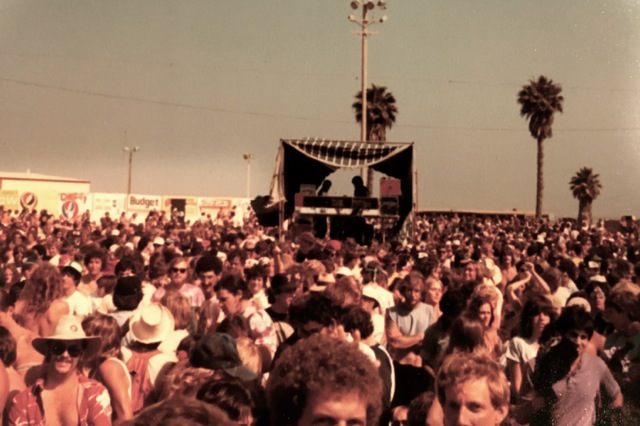 As you can see by these photos, shade was non existent inside the oval shaped arena. There is the infamous grandstand that provided shade during the shows, but just like now, it feels like one is more a part of the show when you are on the floor, in this case, in the dirt. The roof of the grandstand is no longer attached. I believe some strong winds rid the only shade that was provided. And with Earthquake standards in place I’m sure it was not up to code. 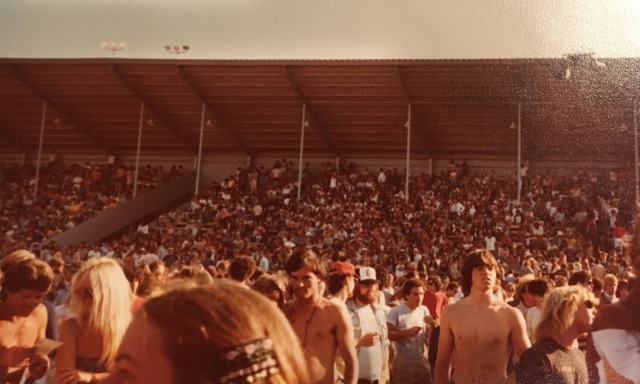 Banners have been part of every Grateful Dead show I have ever been too. This was especially true at Ventura. The wall that surrounds the oval infield has always been, well, as dirty as it gets. Homemade banners were encouraged to be made and hung inside the venue. It was fun to check out the groups that wanted to be recognized, and or just messages to be said. One could always find another if a particular banner was the meeting point before, during or after the show. Dead Heads never got hassled for putting up their art work, because we were all part of the show. Inclusion was the key! 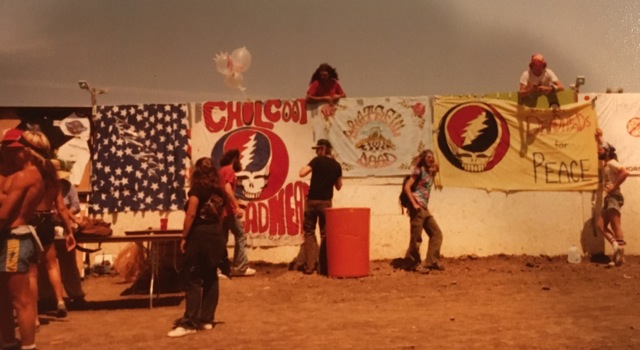 1982 was an amazing year of Grateful Dead music and epic shows. A weekend at the beach became more important than ever for us California Dead Heads. Ventura was born, and raised in GRATEFUL fashion and is still waited for to this day. Skull and Roses carries the torch for all of us no matter what you wear just as long as you are there. April couldn’t come soon enough!