I met the Grateful Dead in 1973, when I was 17 years old. At that time, I decided to play with my bandmates at a high school culture festival. The sound source that I referred to for playing Johnny B. Goode was the track of Fillmore: The Final Days by Grateful Dead. Then I fell in love with the sound of the Grateful Dead, and when I heard Skull and Roses, I got into the deep Dead world!

There is one interesting story. This is the story of that famous Einstein. One day, the son of the founder of the Japanese violin maker named Suzuki Violin, went to Germany. He met Einstein and had a violin session with him. Einstein’s wife, who heard the two play, said, “You are Japanese, why can I feel Germany from your music?” Einstein returns: “Because all human beings are the same…” 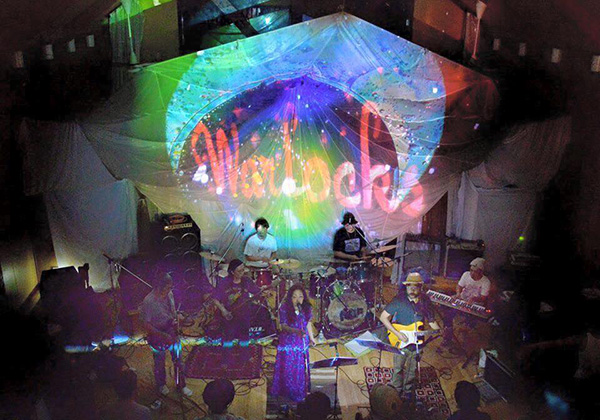 I think Grateful Dead’s music has something in common with this story. It means that music has a world common to humans that transcends language, culture and land boundaries. Therefore, it is inevitable that there are people in Japan who like Grateful Dead music. Many Japanese fans will find it difficult to understand their lyrics perfectly. But their music affects us in a dimension that transcends words. We can be happy, have a deep trip, and we can share their world! Right now, I’m working on singing their lyrics in Japanese. I want the Japanese Dead Heads to better understand their world of music. Sometimes, our friends who share my efforts provide translations for us. That’s how the Japanese Dead Heads have a deep understanding of them, and want to have more fun!

I get a lot of energy from the music of Grateful Dead. I am really grateful for their music!

The Warlocks was formed in 1992. Before I formed the band, I enjoyed playing sessions with our music friends, but at the time there was no place to play. At that time, Japanese Dead Head “Yuko” opened a live music club named “Yukotopia” in Tokyo. She is a regular of the 80s Dead Show and one of the famous Dead Heads in Japan. With the creation of Yukotopia, we got a place to play music, and we formed a band with session members. It became Warlocks and debuted at the 1st anniversary party of Yukotopia.

Some band members at the time didn’t know Grateful Dead. But I experienced a Grateful Dead show in 1979—I got to go to the complete New Year’s run at Oakland Auditorium, December 26-31, 1979—and knew how great it was. I wanted to share this wonderful world with my Japanese friends, so I started playing the Grateful Dead in the band. I hoped everyone would know Grateful Dead music and the music scenes through Warlocks. And I wanted Japanese friends to go to America and experience the Dead. The Warlocks show in Yukotopia attracted many Americans and foreigners living in Japan. It was a small live house with about 100 people, but the number of customers gathered so that it became full. And Yukotopia has become our Promised Land.

Yuko also had some connections with big American musicians. Sandy Rothman and David Nelson have visited Japan and played at Yukotopia. Sandy Rothman is also my friend and we played on Japanese radio and some live houses. And now the members of Warlocks are Yukotopia and the music friends who gather in the Japanese Dead scene.

Although it is small scale, there is a Grateful Dead music scene in Japan. There are many jam bands, and they are influenced by Grateful Dead Music. Even if they don’t play Grateful Dead songs, they learn their styles of playing and ways of thinking about music from the Dead. Some bands have experience playing in America. “Oshino Dead,” which is held at the foot of Mt. Fuji, is the largest Dead festival in Japan and gathers about 2,000 people. From the Old Heads who experienced the 70’s Dead to the Phish generation, younger party people and kids, everyone shares the Dead. Not only Warlocks but various Japanese bands influenced by Grateful Dead appear and enjoy music and space while camping!

Also, not only music but also art, many Japanese are affected by the Grateful Dead. They enjoy painting, collage art, pottery, apparel, etc. with the Grateful Dead motif. Not only old deadheads like us but also young people will inherit the Japanese Dead scene and culture. Not fade away, we keep on truckin’ with Grateful Dead!

We played ”The Wheel” in Oshino Dead, Please check it out.
https://www.youtube.com/watch?v=D5rRtYSwnOU

Dennis: One of my sweetest memories of the 1980 Warfield shows was of a cluster of Japanese Dead Heads—seemingly none knew any English when I introduced myself—sitting in the front row of the balcony and rocking out. We asked if any of those people were connected with Warlocks. Ranbo, the Warlocks’ camera person, answered: 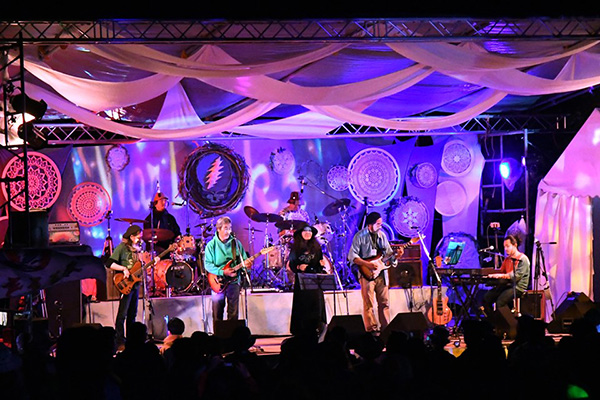 In the 1980s, Japanese fans for Grateful Dead were still few. It was mostly single fans and there were no groups, There was one guy…. His name was Mochi, and he went to San Francisco from Tokyo in March 1980 to experience the Grateful Dead show. One day he found a Grateful Dead Warfield concert announcement in the newspaper: Concert at Warfield Theater from September 25th to October 14th, 1980. There were a total of 15 shows.

He waited for the Day in an apartment on Haight Street with four Japanese roommates. While waiting, they bought a 25-cent color marker pen at a stationery store, Mendel’s, on Haight Street, and used the marker pen to draw “Grateful Dead” in handwritten (Kanji) Chinese characters on bed sheets.
They drew and painted the flags, forgot about the time and had fun. They celebrated the 15th anniversary of Grateful Dead and created three flags to enjoy the show.

Sue watched a JGB concert at the 1978 Berkeley Keystone. .

They weren’t good at English conversation yet, But they knew the GD language and knew how to enjoy the GD show. They (mostly two person) enjoyed 9/26, 9/31, 10/3, at the Warfield. At the Grateful Dead show on October 4th, they hung down the two hand-painted Kanji Grateful Dead flags from the front of the Balcony. A Grateful Dead crew member (Bill “Kidd” Candelario) spoke to them, Mochi and Sue. “You made it? Follow me…”.  And they were taken backstage. Bill put a “Backstage pass” on their chest.

Their Grateful Dead flags were hang down the until last day of the run. (This flag photo appear in Grateful Dead: The Official Book of the Deadheads). Before Encore song “US Blues “on 14th of October, Bobby was commenting to Japanese fans on the stage. This is a legendary story of Japanese Dead Heads.

Then most people returned to Japan. And they created a small GD fan community in Japan to help spread the music and culture of GD. The main member of the group, “Mochi,” stayed in San Francisco after 1980, but after 1995 he returned to Tokyo and joined the second generation Tokyo Warlocks, playing Bobby’s parts, and imbuing the band with the spirit of Grateful Dead. He is currently a solo musician and of course plays and sings Grateful Dead Music.

Sue lives in Osaka, Japan and supports a young Dead Heads band. And they are always close to us. 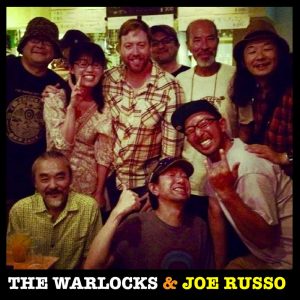 Jun (bass): When I was listening to Terrapin Station and thought that I also wanted to play, Ken suddenly called me and said “Join our band!” and I did. Amazing!

Shu-Hey (keys): I am the youngest member of Warlocks. My first meeting of the Grateful Dead was when I was 15 years old in 1998. There was an apparel shop named “Jack Straw ” in my home town that sold American hemp wear, artistic tie-dye and batik. I got to know the Grateful Dead through fashion. At that time, I couldn’t understand the music of Grateful Dead and listened only to Phish. I wanted to do a jam band and learned music through Jazz music. After that, I was active as a jazz bassist, but as I was looking for more psychedelic musicality… I arrived at Yukotopia. At that time, Yuko lived in Hawaii and the shop was run by her partner “Roku.”. He is also a Dead Head, and plays guitar in his band. I was invited by Roku to join his band. Through my experience with him, I was able to learn more about rock music and GD. And I fell in love with GD and explored their music. Shojiro (Billy’s part) and past bassists of warlocks were also Roku’s band members. I met a lot of musicians and Dead Heads in Yukotopia. And now I’m enjoying GD as a member of Warlocks!

GD gave me a lot of grateful experience, and taught me about human nature, kindness, and love through music. I am very grateful for all the encounters. Thank you very much!

Last year we had 6 live shows. Live house and outdoor festival shows. It was less than half the number of times in the usual year.

Since the government has set rules for the pandemic, we implemented it in a format that suits the situation. There were restrictions such as live broadcasting without spectators, number of people, and time restrictions. We used YouTube for the live stream. I get the impression that Zoom is more commonly used in corporate telecommuting and meetings than entertainment in Japan.

Anyway, during the pandemic, we lived to deliver and enjoy the music as much as possible. We believe that live sound has power, vibration, and excitement that cannot be conveyed by distribution. I hope that the daily life of enjoying music without worrying about anyone will come back soon.