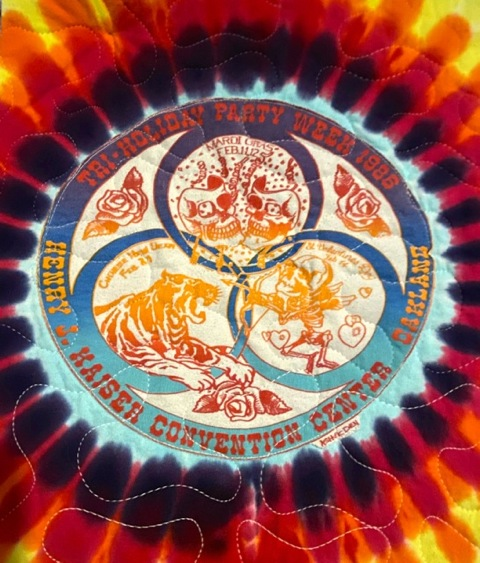 Here we go again, back to the Kaiser Convention Center for another full week of shows. It’s still winter and cold, but we got pretty lucky that it is only COLD, not raining and muddy. Being from Southern California and having to drive 8 hours North every 5 or 6 weeks is a little bit of a struggle, but we did it with a smile and anticipation every time. This run was especially exciting because the shows would be out of the ordinary due to the annual celebrations that were going to take place. And after just spending a week camping there for the New Year’s shows and all the hoopla, it seemed most appropriate to just keep the party going. That’s why many of us were able to attend at least thirty plus shows in a year! 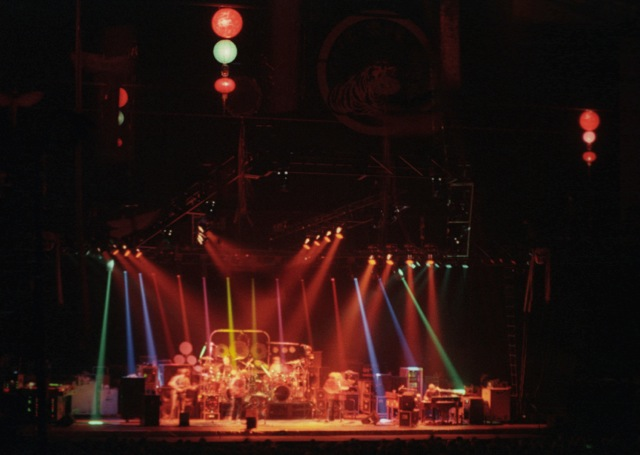 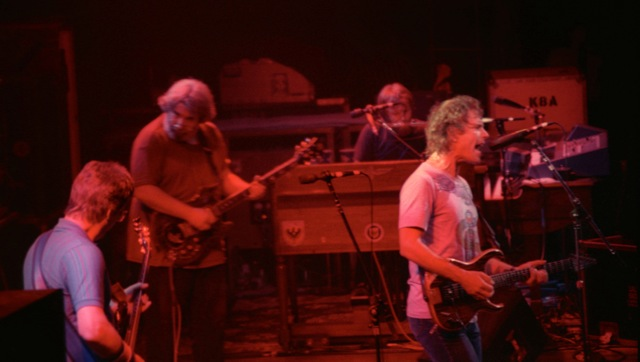 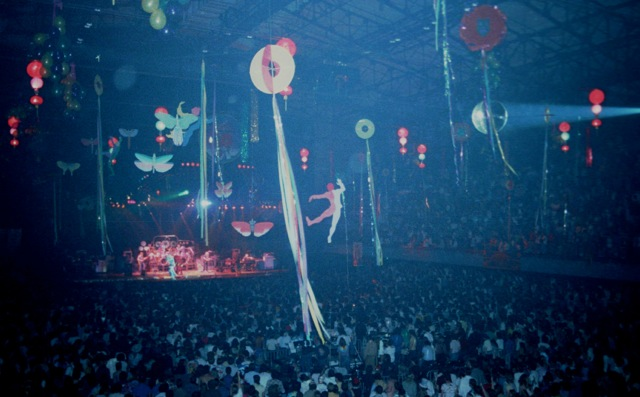 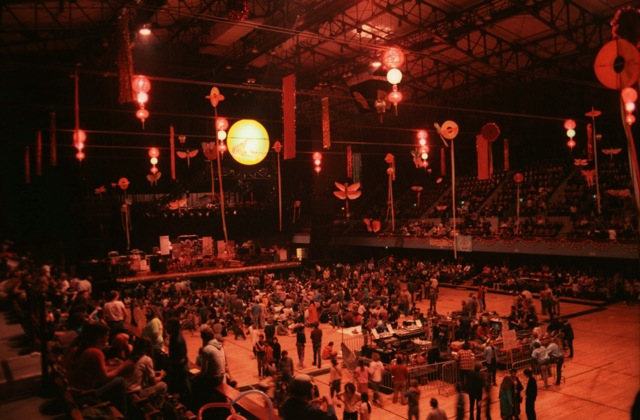 They called this run The Tri-Holiday Party because we get to enjoy Chinese New Year, Mardi Gras, and Valentine’s Day parades. Chinese New Year was celebrated during the first two nights. Many of the same Dead Heads that were there for New Year’s were back for the same reasons, five nights of Grateful Dead fun. Upon entering the arena, one would look up and see the ceiling covered with hanging décor that encompassed the three themes for the Tri-Holiday party. It was so festive and colorful, Bill Graham Productions always did a great job with decorating for our parties. It felt more relaxed inside than it was during the New Year’s shows. Fans were not rushing to get the front filled in, Hacky Sackers were spread out, along with jugglers. It was very festive and relaxing to be inside early, hanging out with friends, setting up for taping the show, staying warm and still able to sell food to hungry Dead Heads. The Kaiser shows felt like family, it really was an amazing time in my life. 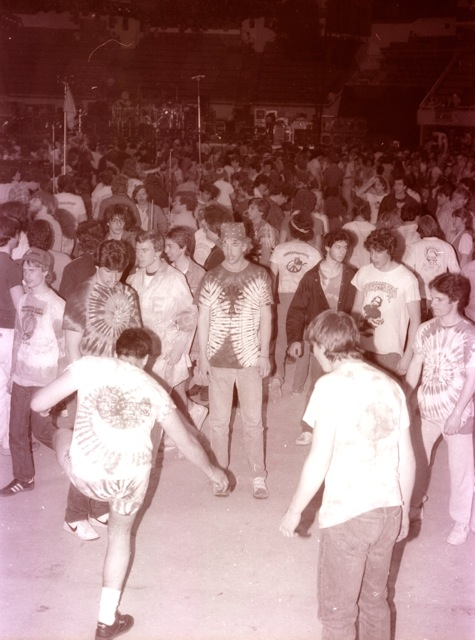 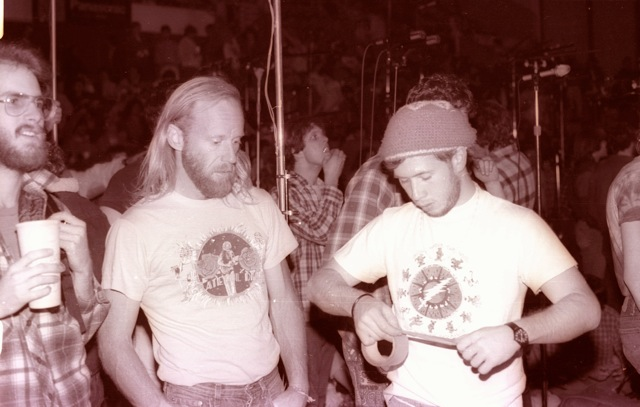 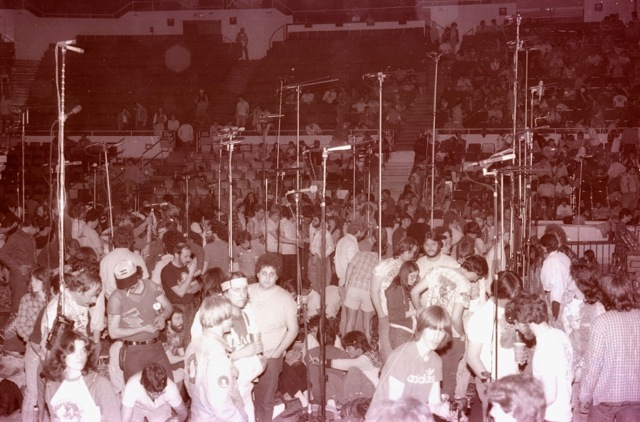 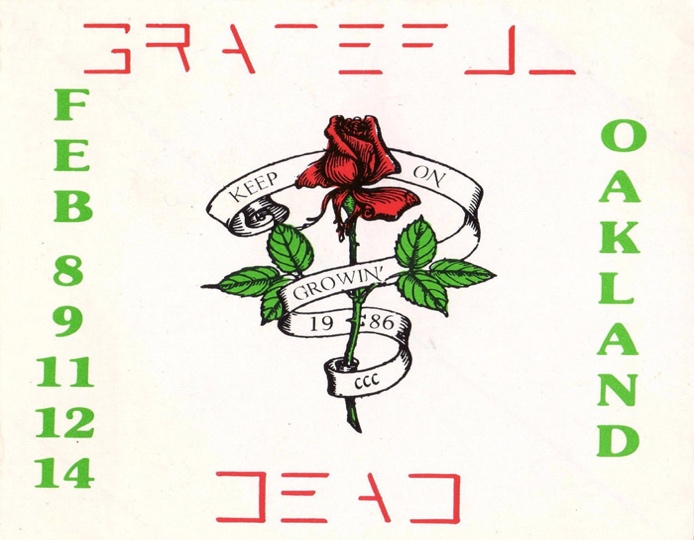 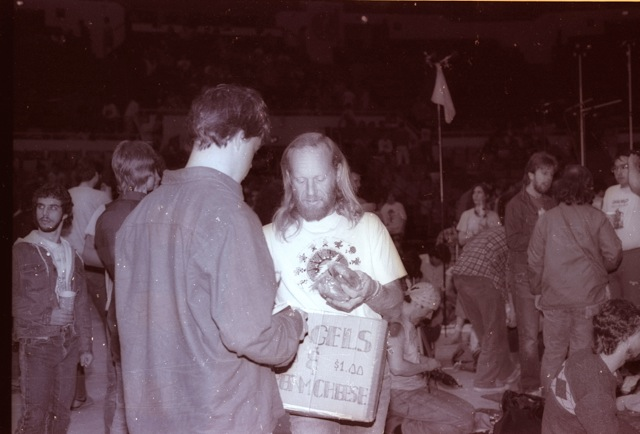 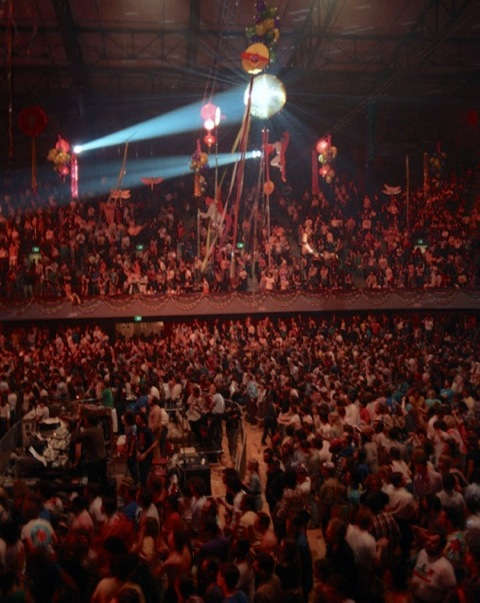 The sensational part of these two shows occurred during the drums. An eye-popping dragon wove through the floor from the back to the front while dancers twirled during the magical moments of celebration. The dragon was mostly bright red and blueish/purple and had piercing eyes that would mesmerize you. It was rather long so it could almost cover the stage from side to side. The Dragon dance filled the arena with so much excitement and joy. Not a soul was sitting because of the energy. 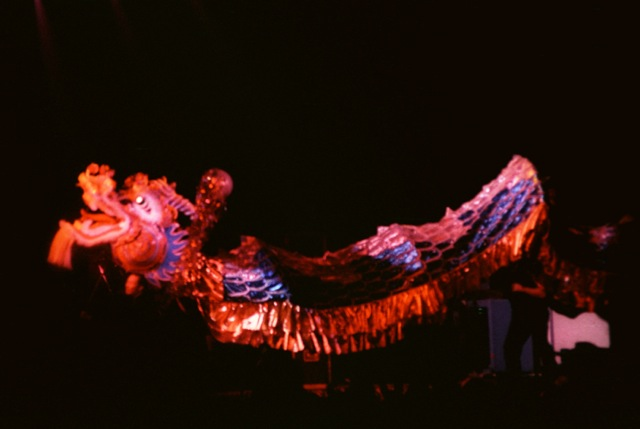 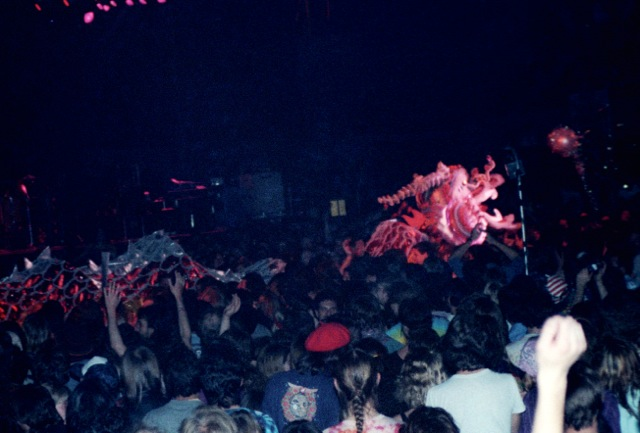 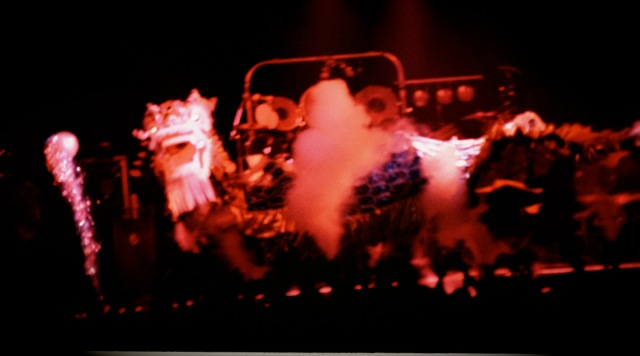 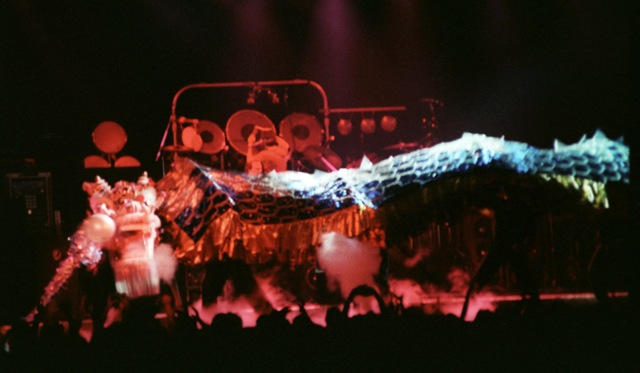 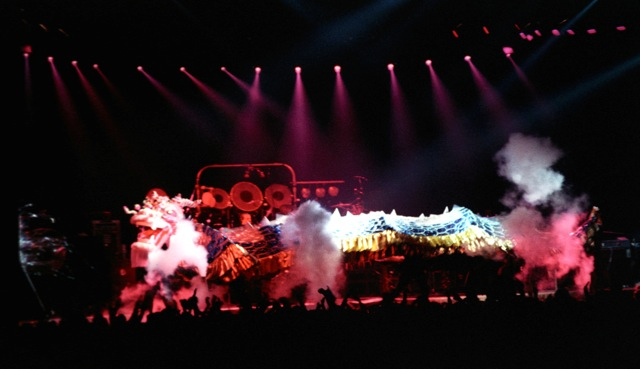 The first two days of this Tri-Holiday party were absolutely a blast. From the unexpected “Iko Iko” starter to the “Baby Blue” ending was just the beginning of a beautiful reality. To think we still had three more shows ahead, and lots more colorful celebrations to be had. Dead Head life was, for the moment, perfect!

The photos I have shared were taken by one of my all-time best friends and tour buddies, Joe Giannelli.  He and I were both avid picture takers, so I let him do all the camara work for these shows while I just enjoyed the ride.  Here are a couple more photos that I felt really shared the feeling of what it was like to be part of the best party in the whole world! I miss you, Jerry! 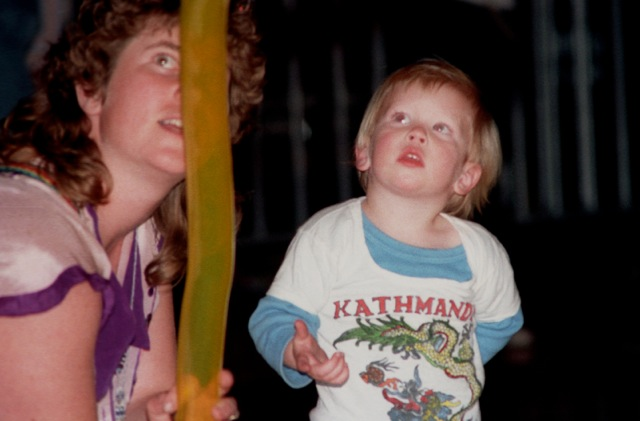 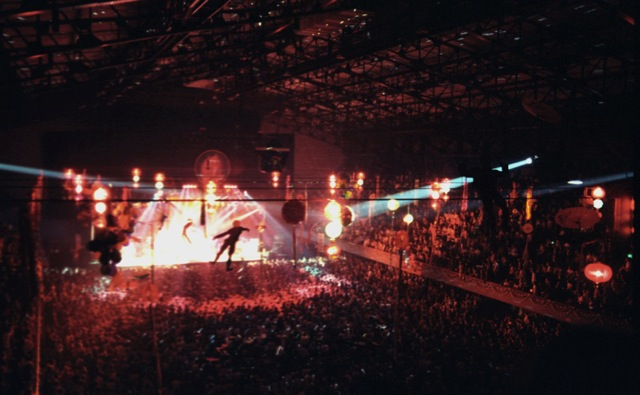 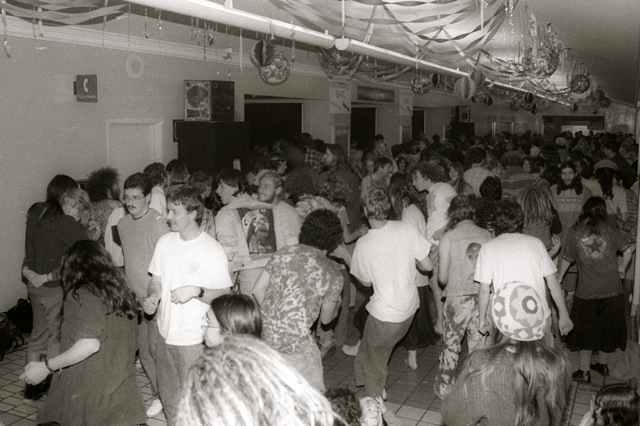 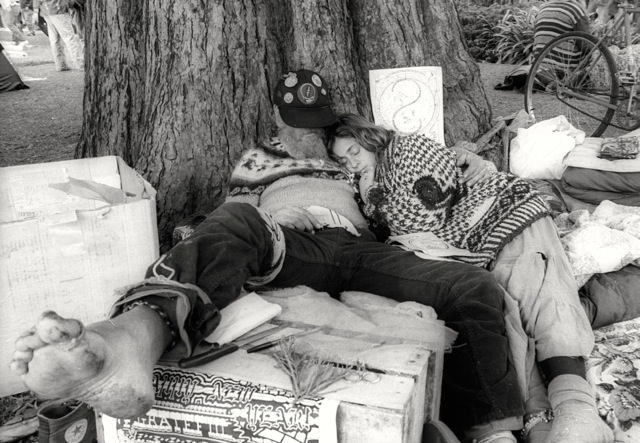 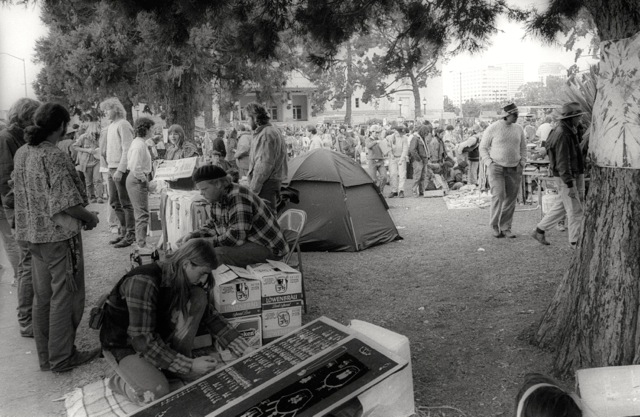